9 Air-Cleaning Houseplants That Are Almost Impossible to Kill

What might your office or apartment have in common with a NASA spaceship? Unfortunately the answer may be poor air quality. Indoor air pollutants have been ranked among the top five environmental risks to public health: Stagnant indoor environments allow pollutants to build up and stick around in greater amounts than we humans should be breathing in. Living and working in places rife with air contaminants and lacking decent ventilation can cause “sick building syndrome,” which can cause headaches, dizziness, nausea, and eye, ear, and nose irritation. Lucky for us, NASA scientists have been working to understand this problem and find solutions. Their space-age solution was an easy one that anyone can use: Use houseplants to clean the air .

Given that people spend more than 90 percent of their time indoors, air quality matters . Furnishings, upholstery, synthetic building materials, and cleaning products in homes and offices can emit a variety of toxic compounds, like formaldehyde. Indoor air pollutioncan also be caused by pollen, bacteria, and molds, as outdoor air contaminants like car exhaust finds its way into buildings. All of these are made worse in small or poorly-ventilated spaces (like maybe your apartment with that window that you accidentally painted shut last year).

The good news is that there’s an easy and affordable way to combat the presence of the yucky stuff we may be breathing in, and it comes right from the natural world. Plants purify air, making them part of what NASA calls “nature’s life support system.” Adding potted plants to a room has been shown to reduce the amount of air particulates (although plants in bloom may be contributing their own compounds to the air) .

So, how do houseplants clean the air? Plants absorb some of the particulates from the air at the same time that they take in carbon dioxide, which is then processed into oxygen through photosynthesis. But that’s not all—microorganisms associated with the plants are present in the potting soil, and these microbes are also responsible for much of the cleaning effect .

Beyond air quality, plants just make people feel better. For example, hospital patients with plants in their rooms were more positive and had lower blood pressure and stress levels . Similarly, indoor plants may make people smarter by allowing them to stay alert and reducing mental fatigue .

Although houseplants may be intimidating to those with a “black thumb” or fear of commitment, it turns out that many plants are easy to care for—so easy, in fact, you’d have to try pretty hard to kill them. Below, we’ve pulled together a list of nine virtually-indestructible plants inspired by NASA’s research.

Each kind of plant has its own favorite environmental conditions, so look for a tag that comes with the plant or online to find out how much sunlight and water it will need. If your plant doesn’t come in a pretty pot, or if it outgrew its previous one, you can easily repot it. Just find a pot that’s at least one inch larger than the previous container, add potting soil to the bottom, and place the plant so that the top of the soil remains at the same level as before. Finally, carefully pack potting soil around the edges of the plant and water it. Voilà!

In the NASA research, this plant was an air-purifying champion, removing ammonia, benzene, formaldehyde, and xylene from indoor air. Popular and inexpensive at garden stores, they can be planted outside after they’re finished blooming.

Spider plants are among the easiest houseplants to grow, making them a great choice for beginners or forgetful owners. A fan of bright, indirect sunlight, spider plants will send out shoots with flowers that eventually grow into baby spider plants or spiderettes.

There are more than 40 different kinds of Dracaena plants, making it easy to find one that’s a perfect fit for your home or office. They’re common foliage plants with long, wide leaves that are often variegated with lines of white, cream, or red. Pet owners might want to select a different plant, however, as these are toxic to cats and dogs.

Though the ficus is a tree in its native home of southeast Asia, when it grows indoors, it’s a hardy plant that ends up being between two and 10 feet tall. So why not get figgy with it? Grow this low-maintenance houseplant in bright, indirect light and allow the soil to dry out between waterings. Although this plant has some serious air-cleaning abilities, it can also be taken outside in late spring and brought back indoors when temperatures are warm and well above freezing.

Peace lily plants are relatively small compared to many of the plants on this list, but they still pack some major air-cleaning abilities. Easy to grow, these plants will flower for much of the summer. Just be aware that those flowers (like all flowers) do contribute some pollen and floral scents to the air, so you may want to avoid having a room full of them. Put peace lilies in a shady spot and keep the soil moist without overwatering.

These plants prefer to clean the air from a cool location with high humidity and indirect light. They’re relatively easy to grow, but they do need to stay moist. Check the Boston Fern’s soil daily to see if it needs water, and give it a good soak once per month.

This is one of the hardest houseplants to kill. Although it does need to be watered occasionally, it generally prefers drier conditions and some sun.

A superstar of filtering formaldehyde, these palms thrive in full sun or bright light. Part of the reason they can filter so much air is that they can grow to be pretty big—as tall as four to 12 feet high, making them exciting (and pet-friendly) indoor additions.

In addition to being easy to care for, aloe makes some serious health claims. The plant’s leaves contain a clear liquid full of vitamins, enzymes, amino acids, and other compounds that have wound-healing, antibacterial, and anti-inflammatory properties, and there is some evidence that aloe may help (and is unlikely to hurt) skin conditions like psoriasis .

Please contact us about how we can help make your construction vision a reality.

Eichler is added to historic register Congratulations to the residents of the Fairglen Additions neighborhood of San Jose who led a successful campaign to have the tree-lined district — distinguished by its 218 Eichler homes — added to the National Register of Historic Places this year. The neighborhood near Curtner and Booksin avenues is San Jose’s largest enclave of Eichler homes, built between 1959 and 1961 and known for their distinctive flat or lowsloped roofs, ...

New guidelines aim to promote compatibility, ease friction between neighbors Ever since they made their Palo Alto debut in 1950, Eichler communities were intended to be more than the sum of their boxy, glassy parts. Characterized by glass doors and large windows, flat or low-pitched roofs and ample backyards, developer Joseph Eichler’s homes famously celebrated indoor/outdoor living. They also promoted a community ethos through use of common space, as evidenced by the community center, neighborhood ... 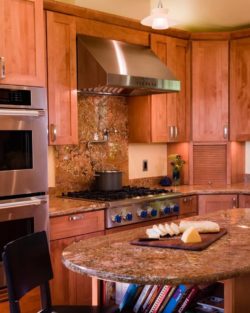 One of the most critical decisions you will make about your custom home is selecting the right builder for the job. Compare the services offered by different companies to be clear about what you are paying for, what to expect, and how the process works. The design and construction project can be complex, and you want it done within your budget, and on time. The ideal building partner understands your needs, helping you confidently navigate ...

Join us on June 9th for the 2018 Silicon Valley Modern Home Tour. Be sure to see our project “Sunnymount Avenue” along the route!

At Flegel's Construction Co., Inc. we pride ourselves on creating homes our clients will love that express their unique personalities. We can make your vision become reality.