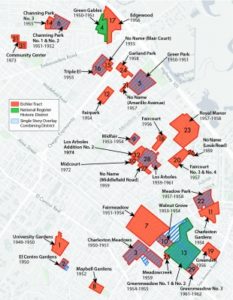 Ever since they made their Palo Alto debut in 1950, Eichler communities were intended to be more than the sum of their boxy, glassy parts.

Characterized by glass doors and large windows, flat or low-pitched roofs and ample backyards, developer Joseph Eichler’s homes famously celebrated indoor/outdoor living. They also promoted a community ethos through use of common space, as evidenced by the community center, neighborhood park and swimming pool in Greenmeadow, one of two Eichler neighborhoods on the National Register of Historic Districts.

Yet these very qualities that have long united Eichler owners have also created rifts in many of the city’s 31 subdivisions. Large new Spanish-style homes in Eichler enclaves like Faircourt have sparked outrage — and calls for action — from longtime homeowners. Some have appealed the approvals of proposed new houses that they deemed incompatible; others argue that two-story homes should be banned altogether.

The conflict hit its crescendo in 2015, when residents from four different tracts petitioned for “single-story overlay” districts, which prohibit new two-story homes and second-story additions. In a series of tense meetings, the council approved the requests from two neighborhoods (Los Arboles and Greer Park North) and rejected two others (Royal Manor and Faircourt).

In each case, the council weighed arguments of those who characterized two-story homes in Eichler neighborhoods as architectural blasphemy — a garish indulgence that threatens the privacy of neighbors and diminishes the aesthetic of the community — and those who see two-story homes or second-story additions as ways to accommodate multi-generational families and as legitimately entitled by property rights.

In an attempt to bridge the divide, council directed staff to draft special guidelines for constructing homes and additions in Eichler neighborhoods. On Feb. 22, the city’s Historic Resources Board approved the guidelines, which are now set to go to the City Council for final approval this spring.

Even though the new guidelines are voluntary, they are already causing frustration and confusion among some Eichler owners. At the Feb. 22 meeting, some argued that the guidelines don’t go far enough in protecting neighborhood character while others claimed that they are too proscriptive.

Michael Nierenberg, who owns a two-story Eichler, argued that the city conducted insufficient outreach. Staff sent postcards to each of the more than 2,000 Eichler homes, but only about 150 people, Nierenberg noted, were interviewed before the guidelines were crafted.

He was one of several residents who rejected the idea of “freezing Eichlers in time” by restricting design options.

“As new materials come along — and new looks and things — we might be missing out on siding, roofing and things that might make your house better, not worse,” Nierenberg told the board.

Manas Madal, who lives in Fairmeadow, argued that adopting the new guidelines would infringe on the property rights of homeowners. If approved, the guidelines should stay voluntary and not subject to regulation by the city.

Others lauded the guidelines as a good step, even if they took issue with certain details. Diane Reklis, who has lived in an Eichler for 40 years, said the document has “lots of good stuff in it” but raised concerns about the document’s provisions on accessory dwelling units. The guidelines allow homeowners to build detached housing that is up to 17 feet in height and 900 square feet in area.

If these small houses are positioned in the rear of the property (as the guidelines suggest), they will require occupants to walk past the main residence, possibly intruding on privacy, Reklis said. She also noted that 900 square feet is quite large in the context of Eichlers.

“You’re taking half the size of a current Eichler and sticking it in the backyard,” Reklis said.

The recommended 126-page document includes guidelines on everything from placement of doors and design of windows and roof forms to broad issues relating to cladding materials, massing and height. They encourage the builder to employ post-and-beam construction (which is synonymous with Eichlers); use roofing materials with a “flat, visually unobtrusive appearance”; and avoid historicist styles such as Mediterranean Revival and New-eclectic.

It also includes guidelines for constructing basements and first-story additions. Whenever possible, the document states, the project should avoid direct views into neighboring windows that may require additional privacy, including bedroom and bathroom windows.

Board Chair David Bower said that in recent meetings on the new guidelines, the issue that kept coming up was privacy. Residents said they were particularly concerned about second-story add-ons and neighbors peering through windows into their yards. The guidelines address these issues, he noted.

Board member Michael Makinen pointed to another public concern: uncertainty over how the guidelines will be used. Though they are currently not subject to any regulations from the city, that can change, he noted.

“Yeah, we’re calling it voluntary but is it really voluntary? I think there is a feeling … that they may be more than what we advertise as voluntary.” Makinen said.

It will ultimately be up to the council to decide how to use the new guidelines. The board considered various approaches toward incorporating the Eichler guidelines into the city’s review process but refrained from specifying the exact nature of how or whether the rules should be enforced. They agreed that, when possible, the city should defer to neighborhood preferences. The board did vote 5-0, with Brandon Cory absent, to recommend that the new guidelines at least be used in tandem with the existing Individual Review process when considering two-story homes and second-story additions.

Councilwoman Karen Holman, the council’s liaison to the Historic Resources Board, recalled the city’s tendentious path toward the new guidelines and expressed hope that the new document will help tone down the acrimony and reduce the number of appeals being filed by residents concerned about the new house going up next door.

“We have neighbors fighting neighbors … because of new construction, additions and such in Eichler neighborhoods,” Holman said. “I see these (guidelines) as a resource to help abate those appeals and those battles within neighborhoods.”